Airfreight Logistics
Home Articles Features Emirates SkyCargo and Agility Work Together to Charter 18 Freighters for an... 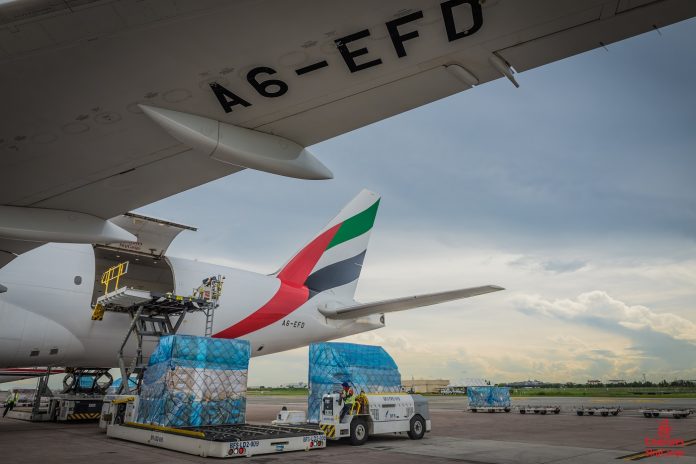 With global average temperatures continuing to rise and an increasing number of heat waves impacting places like Europe, and with record highs being hit demand is beginning to soar for air conditioners. As such, many manufacturers are pushing to respond to the demand, especially for the upcoming summer season.

Typically, air conditioners are shipped to Europe via sea freight, due to the higher volumes they are moving and an overall lower shipping costs. However, with a drastic shift in demand, distributors are being pushed to deliver more with less lead time.

In response to their customers looking to beat the heat, Emirates SkyCargo recently organized freighter flights in cooperation with Agility a leading freight forwarder. With an extreme emphasis on shipping speed and efficiency, these AC units were a hot commodity and needed to be delivered to a variety of destinations.

For more, we spoke with Mr. Tosaworachart Roekbangplad, Thai and Myanmar Cargo Manager, Emirates SkyCargo; Mr. Jesda Kurjirattikan, Managing Director, Agility; and Mr. Jakkapan Limpthanarak, Director of Sales and Marketing, Agility. The group shared their insight into managing a large amount of AC units under a time crunch; including how to communicate effectively to find the fastest and the most suitable solution for their customer’s need.

Demands of the Market

June to September are the typical summer months for the Northern Hemisphere. However, with an increasingly fluctuating climate and stronger heat waves, this year’s summer was amongst the hottest in recorded history for many European towns. With a longer and stronger summer season, this year the demand for air conditioners was unusually high. Due to this, manufactures in Thailand responded by producing extra AC units that then had to be sent to Europe quickly. To send them by sea would mean nearly a month of waiting and an opportunity lost. This is where the flexibility and speed that air freight provides became a life saver, as Emirates SkyCargo assisted 18 air freight shipments from Suvarnabhumi International Airport to destinations across Europe to fulfill customer demand.

“Agility contacted us regarding May’s summer air freight shipment. Their client was looking to urgently air charter an enormous load of air conditioners into Europe via Italy’s Milan–Malpensa Airport. Liaised with the headquarter in Dubai, we requested the quotation and necessary details. We then connected with the warehouse in Suvarnabhumi Airport, checking the loading schedule. Communication and cooperation between Emirates and Agility was key, especially for the details and availability of the cargo. The information is necessary for load planning, to fit in as much cargo as possible in one shipment and to ship at max speed. The tricky part is that air conditioners come in different sizes and the cargo hold in freighters have different shapes and curves.” Mr. Roekbangplad explained.

The air conditioners transported included different models and sizes, as well as different compressors for each model. Cooperation between the manufacturer, freight forwarder and airline were essential to laying out plans for transporting cargo from the factory, managing shipments, and designing loading plans to ensure smooth and rapid transportation.

Mr. Kurjirattikan said: “We were invited by the air conditioner manufacturer to bid for the transportation project to present our idea about the urgent shipments. Our solution was to charter freighter planes to transport the cargo, due to its high volume and the urgency to arrive at the destinations.”

Agility employed their industry experience and strategically advantageous warehouse locations, as well as a network of services and strong bonds between airline alliances, to provide the most reliable solutions at a competitive price and won the trust from the client. With the mission to fly a mass amount of air conditioners to European destinations, Emirates SkyCargo was one of the first airlines they proposed.

Emirates SkyCargo is one of the leading players in air cargo transportation, and they maintain a large fleet of freighter. Freighter availability, servicing capacity and destinations coverage, together with servicing flexibility, operational safety and efficiency made them the perfect transport provider for the job. “Thanks to the great support from Emirates in organizing the charter fleet for the project under a very short notice. Typically, it would take at least a week to charter a flight. The first flight in our operation took off in just 4 days from the initial contact. Emirates’ cargo team has also been a great help with organizing and generating the loading plans. They have also took great care to handling the transportation to the warehouse in Suvarnabhumi International Airport, getting the cargo ready on the pallets and loaded onto the plane. The whole process has to be precise, beginning from picking up the cargo at the factory door through documentation and delivery. To make the most secure and effective loading, the quantity, models, types, and size of air conditioners had to be calculated in great detail.” Mr. Limpthanarak said.

Seamless Cooperation
Other than dynamic, seamless cooperation between the manufacturer and the airline; Agility also took care of packing and boxing the cargo, ready them for the loading. “The whole process of cargo handling and loading was carefully conducted by both Agility and Emirates. The cargo was packed in its commercial packaging, ready for display or delivery to distributors. We brought the cargo into our facility for packing, before carefully relocating it to the airport warehouse. Every process had to be done carefully, preventing dents or damages to the commercial packaging of the cargo.” Mr. Kurjirattikan said.

Under the time constraints the first operating flight was challenging, but by working together the consignees received the cargo in perfect condition. With such affirmation, Agility is confidently expanding their charter operations with the airline toward other destinations all across Europe. The whole operation concluded with 18 chartered flights. “Emirates operated charter flights to transport air conditioners to destinations across Europe, including Milan, Barcelona, Paris and other cities, totaling 18 flight. The operation was recorded as one single project with the most chartering flights in Thailand. The success of the operation resulted from the dynamic, transparent and seamless cooperation between the manufacturer, freight forwarder and the airline.” Mr. Roekbangplad said.

Flexible Offering
The success of the operation was a combination of several factors, efficiency, timeliness, industry specialty, and seamless cooperation between the manufacturer, Agility, and Emirates. “On top of a detailed and precise planning, what Emirates offered to Agility and our client was flexibility. We were aware of the urgency of the client’s situation and provided our best support. We proposed to swap the cargo operation between two warehouses in the airport, which help to increase the speed of shipment management and smoothed the whole operation to its end success.” Mr. Kurjirattikan said.

Other than operation flexibility, the charter flight solution was key to the success of the fast and cost-efficient transport operation. Industry experience and seamless cooperation between the involving parties were the major factors behind the success of the operation with 18 charter flights shipping air conditioners to destinations across Europe. Emirates SkyCargo Thailand, from the success of the project, was praised by their headquarters with an internal award. The compliment was to honor staff with outstanding performances and it was the first time the Thailand branch received such honor. 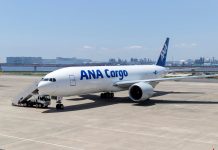 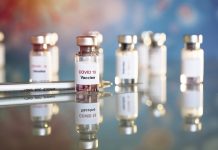 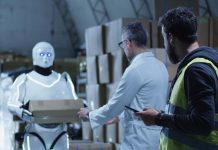 Logistics Industry at the Forefront of Robotic Technology